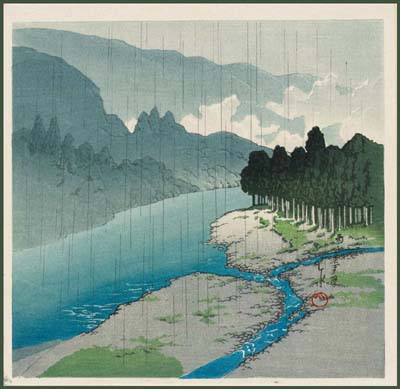 
The word RAIN just like that (ame 雨） is not a kigo in Japan.
Expressions like "long rain, strong rain, gentle rain, soft rain, steady rain" without the mentioning of a specific season are also NOT considerd kigo but topics.

"sheets of rain" can be seen during any strong rain on our windows. This expression is also not a kigo.
Raindrops, again no kigo by itself.

But since the rain in a constant partner throughout the year, there are many kigo connected with it.
A friend suggested there are more than 400 kigo connected to the rain.
Quite possible.
We have the rainy season and the typhoons with a lot of damage, we have flooding and rain rituals.
For the farmers of the Edo period, proper rainfall was a matter of life and death, because it affected the rice harvest.
Rain was called the "Water of Heaven", tensui 天水.

Strong emotions are attached to some kinds of rain:

Let us go through the seasons in more detail. 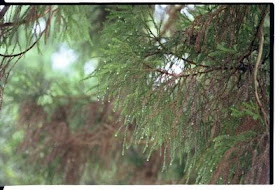 quote
Traces of Dreams - Haruo Shirane
... Harusame (spring rain) referred to the soft, steady drizzle of spring; samidare (literally, rains of the Fifth lunar Month) meant the wet season or the extended rains of summer; and shigure signified the brief, intermittent showers of early winter.
In the poetic tradition these became seasonal topics with specific poetic associations, which were derived from classical precedent and commonly recognized as the most appropriate subjects of composition.

... Spring rain, for example, became associated with soft, dreamy thoughts; the wet season, particularly that of the Fifth Month, implied a sense of unending depression; and the intermittent showers of winter connoted impermanence and uncertainty.

These poetic topics and their associations are, in a fundamental sense, imaginary worlds, which join the poet and the reader, and represent a communal, shared imagination. In writing about the scattering of the cherry blossoms, the Japanese poet is not just writing about a specific, direct experience; he or she is writing a supplement to or a variation on a commonly shared body of poetic associations with respect to the seasons, nature, and famous places based on centuries of poetic practice.

Here, as in the allusive variation (honkadori), originality or individuality is not the touchstone of literary genius, as it often is in the Western tradition. Instead, high value is given to the ability to rework existing subject matter.
source : books.google.co.jp 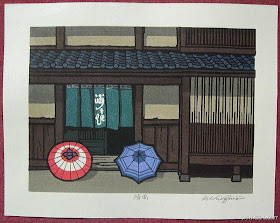 rain in spring (haru no ame 春の雨)
that could be any kind of rain, usually an unpleasant cold one, during springtime.

spring-rain, spring rain (harusame 春雨)
harusame is the word for Chinese glassnoodles. This is a kind of soft, welcome rain for the rice paddies and fields which are dry from the winter time. It is a gentle rain that can last for a day or longer.
Some famous SPRING RAIN haiku


"brings the trees to bud", konome moyashi 木の芽萌やし(このめもやし)
gentle rain at the time when trees start to bud.

This chilly rain evokes a feelilng of sadness of course, since the blossoms are to go. In older haiku and tanka, it had the atmosphere of FUGA 風雅. Lately, it is more of the cumbersome variety of viewing cherry blossoms in a crowd with umbrellas and rain splashing on your legs from too much traffic on the road ...

"Rain on Blossoms" (hana no ame) 花の雨
rain during the time of cherry blossoms, hanadoki no ame
花時の雨（はなどきのあめ）
fuuga 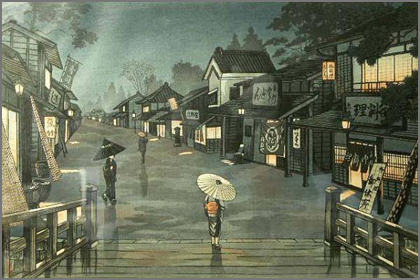 
rain in the fifth lunar month  五月雨 samidare
according to the old lunar calendar. Now it refers mostly to the rain during the Rainy Season (from mid-june to mid-july).
persistent summer rain, early summer rain, June rain,


samidare can bee seen as a pun with midare 乱れる, fall into disorder; be disarranged, to be troubled, to feel depressed during the long rainy season.

While I sit brooding
through a midsummer shower,
a cuckoo cries out
in the deepening night --
but which way is he passing?
Tr. Inhammer 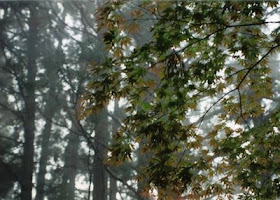 
. murasame 村雨 (むらさめ) "rain on the village"
a passing shower, that brings a special sound to a village with thatched-roof homes.
a kind of yuudachi 夕立, evening shower.
Murasame, name of a Japanese destroyer (1937–1943) of the Imperial Japanese Navy.


"rain to know the time", toki shiru ame 時知る雨 (ときしるあめ)
gentle rain, where you can walk on with your arm lifted over the head and do not need an umbrella yet. Rain that will stop as soon as it started.
..... "fast rain", haya ame 早雨 (はやさめ )
..... "passing rain", toori ame 通り雨 (とうりあめ)
..... "three bundles" rain, mitsuka ame 三束雨 (みつかあめ)
After a thunderstorm, when you have the time to bind three bundles of cut rice plants together before the next rain starts.

Cloudburst, Evening Shower (yuudachi) (夕立）：
often connected with a thunderstorm in the evening. 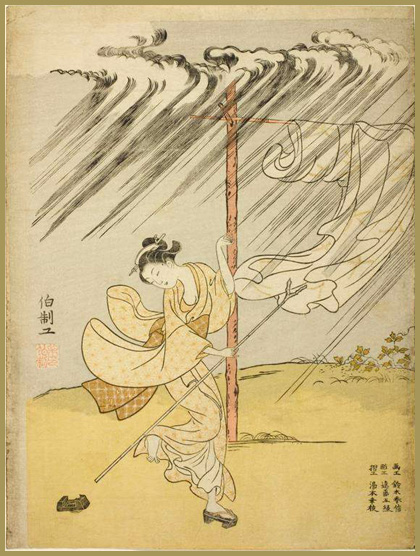 . Rain Rituals (amagoi)
prayers for rain during a drought
prayers for too much rain to stop


rainy season （tsuyu, bai-u 梅雨)
literally "ume no ame", the rain on the plums. The plums (or rather apricots) are just getting ready to be picked and pickled to make salt-plums, umeboshi. Some haiku books quote the rainy season as a season in itself.
..... See here: Rainy Season (tsuyu) Japan

ending rain of the rainy season (okuri-zuyu, okuri bai-u 送り梅雨) : usually a real strong downpour to signal the end of the rainy season. I remember one of these endless rains when we had a lot of mudslides and overflown rivers with so much damage all over Japan.


"great rain", heavy rainfall, downpour (oo-ame, ooame 大雨)
most feared by the farmers because it brings a huge amount of water in a short time and thus a lot of uncontrollable damage.
There are strong rainfalls in other seasons, but they are most typical for the rainy season.


spell of sunshine during a rain (kitsune no yome-iri 狐の嫁入り）
literally: The Fox is taking his bride home. A fox-wedding party) .

“When rain falls from a blue sky,
in the Hour of the Horse,
the Great Fox King takes his bride.” 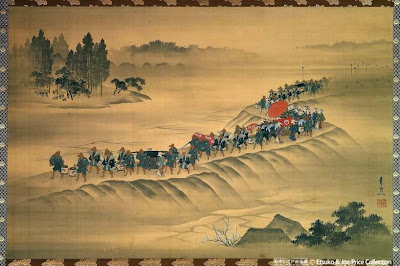 While Kitsune no Yomeiri is the most common term, there are regional versions of the same phenomenon. In Saitama and Ishikawa prefectures it is known as Kitsune no Yomitori (狐の嫁取り; The Taking of a Fox Bride). In Shizuoka it is called Kitsune no Shugen (狐の祝言; The Fox Wedding Celebration).

In Tokushima, the Kitsune no Yomeiri is a less happy occasion. It was called the Kitsune no Soshiki (狐の葬儀; Fox Funeral) and seeing one is considered an omen of death. 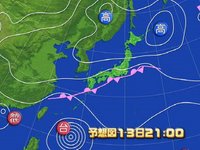 
long rain of autumn (aki no naga-ame 秋の長雨）
sometimes equivalent to the rainy season in its power.

slow-dripping rain falls
on the asphalt, grey on grey,
on my soul as well…

a long staying guest—
a slow-dripping rain
no other friend

rain on January 1, onburi 御降り (おんふり)
"honorable downpour".
If it rains, the harvest will be blessed in this year.


Rain as an all-season topic

fragrance of rain -
growing up eagerly,
the pine candles 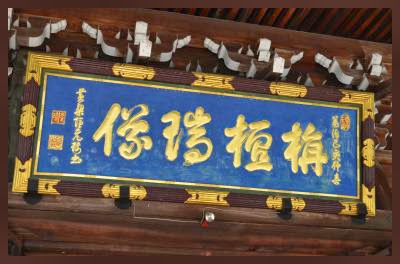 If you have to stand under the eaves of a temple and wait for the rain to stop, eventually looking up, seeing the name plate, you will remember it. This shows the time that has passed during a long shower.

This implies a person who waits too long to start something important, and then gets into trouble.

If you have to stand under the eaves of a shop for a long time, you might as well pretend you are interested in buying something.

sudden rainfall -
all kinds of things take shape
and run along

People make use of what they have to protect themselves from the rain, if they have no umbrella. For example a furoshiki wrapping cloth, the apron of a woman, a straw sack for rice or anything will do. 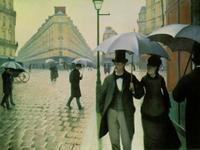 
Florida, Texas and other areas of North America

"iron rain"
a very strong rain that falls in summer, but feels cold, like iron pellets.

Two little raindrops were born in a shower,
And one was so pompously proud of his power,

At last it came to its journey's end,
And welcomed the sea as an old-time friend.
"An ocean," it said, "there could not be
Except for the millions of drops like me." 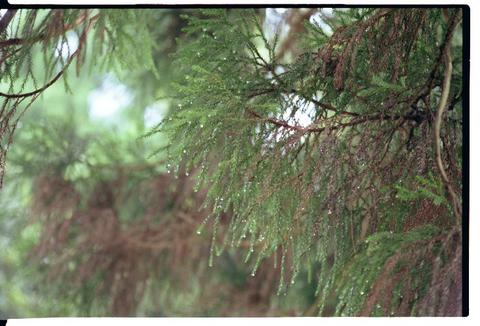 This humorous hokku was written on 7/1 (August 5) in 1804, when Issa was traveling around the area east of Edo. Issa notes in his diary that the official beginning of lunar autumn that year was on 7/2. Perhaps Issa read the hokku to his hosts the next morning, the first day of autumn.

The word amadare in the first line can mean
1) rain dripping from the eaves of a building, from a tree limb, from an umbrella, from a wide rush hat, etc. or
2) simply raindrops (ame-shizuku, uteki).
In the hokku there is no direct indication of what kind of raindrops Issa sees, hears, or feels on his head. Since Issa was traveling around, he could have felt the drops hit him as he walked, or he could been inside, sitting near a porch somewhere. What interests Issa is that only three drops fall. Autumn, especially late autumn, is a season with a lot of cool and increasingly cold showers, so the first morning of autumn only barely manages to live up to its reputation of being a fall-like day. Like so many other things in life which only barely manage to be what they're supposed to be.

Gathering the rains of summer,
how swift it is -
Mogami-gawa River

spring rain -
drips from a wasp's nest
through the leeking roof

rain in autumn -
my straw raincoat
not yet wet


鳩の恋烏の恋や春の雨
hato no koi karasu no koi ya haru no ame


two monks
no other master
than the rain


autumn rains ~
so many birds in wild song ~
a barking dog

Slowly sliding down
from one leaf to another,
earth waits patiently. 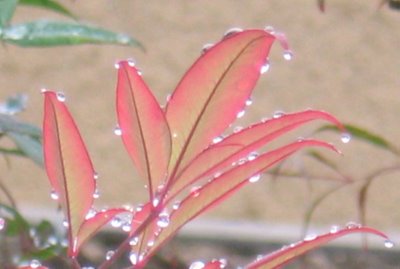 raindrops
in the autumn sun -
a samurai's garden

Treading on God's Gift
" 'How beautiful the rain looks,' thought the Mulla, watching from his window. 'It washes everything clean and makes the flowers and trees grow. It is truly one of the most beautiful signs of God's grace.'
.
'Rain is one of God's great gifts. I can't believe that people try to run away from it.
No wonder God asks in His holy book:
How many of My gifts will you deny?'


meeting rains
my umbrella sings
inside a songless me


cold drops of rain
together with wind
shaking trees

rain and wind --
i prefer to avoid
roadside trees


ever more rain -
I am losing the battle
against the weeds


. SAIJIKI - HEAVEN in all seasons