The cornus family of plants comes in many variations and therefore different seasons as a kigo in other areas than Japan. See below.
In Japan, the flowers on the twigs are all looking up and it seems like snow on the branches. They grow on Honshu, Kyushu and Shikoku in the mountainous areas.
Gabi Greve

Yamabooshi 山法師
Flowering from May to June. Yamabooshi means "mountain priest", since the round part in the middle of the flower reminds us of the shaven head of a priest and the four white petals are like the scarf worn by monk-soldiers on the famous temple Mt. Hieizan, Kyoto. The most famous of these mountain priest-warriours is maybe the brave Benkei, the companion of Yoshitsune. But that is a different story.

Hooshi (hoshi 法師) in the beginning was a term for a high-ranking priest who could explain the Buddhist teaching, but later the meaning became more wide to include any priest or monk, especially the ones from Hiezan, which is the meaning of "mountain" YAMA in the name of this flower.

In Autumn the red berries look almost like strawberries.
http://www.hana300.com/yamabo.html

We started the Dogwood Initiative 2001 in an effort to emulate the exchange of cherry blossom and dogwood trees that symbolized the friendship between the US and Japan at the beginning of the 20th century. We will create a beautiful dogwood promenade along the banks of the Kyobashi-gawa River as a living testament to the friendship between the US and Japan, representing for centuries to come the goodwill of the people of the US toward the people of Hiroshima.
source : www.city.hiroshima.lg.jp

There is also a Chinese version.
http://www.gartendatenbank.de/pflanzen/cornus/a004.htm


hanamizuki, hana mizuki 花水木 dogwood blossoms
They bring a light and bright feeling to the haiku.
. . . CLICK here for Photos !

hanamizuki were introduced to Japan as a return-present, when Japan sent the cherry trees to Washington for the Potomac walk. So they are a symbol of the friendship of both countries.
As kigo, they are therefore rather new. 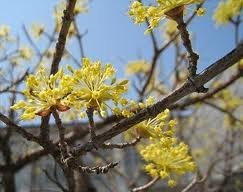 Flowering dogwood blooms in the spring, as its new leaves are unfolding, and usually remains showy for 2-3 weeks.
Flowering dogwood occurs naturally in the eastern United States from Massachusetts to Ontario and Michigan, south to eastern Texas and Mexico, and east to central Florida. It grows in a variety of habitats throughout its range, but generally occurs on fertile, well drained but moist sites. Flowering dogwood is usually an understory component in mixed hardwood forests or at the edges of pine forests.
http://www.floridata.com/ref/C/cornus_f.cfm

The bright red fruits ripen in September and are eaten by birds.
You can tell a dogwood by its bark...
Look at more pictures here:
http://www.duke.edu/~cwcook/trees/cofl.html

The flowering dogwood is the state tree and flower of Virginia, and the state tree of North Carolina, both southern states in the US. The dogwood flowers in mid April thru May in most Southern States.

The inflorescence ("flower") of the Pacific dogwood (Cornus nuttallii) is the official flower of the province of British Columbia.

"Dogwood, common name for a family of flowering plants distributed mainly in the temperate areas of the northern hemisphere, with a few species occurring in tropical South America and Africa. Of the 14 genera in the family, only the dogwood genus is native to North America. Members of the family are mostly trees or shrubs with simple, opposite leaves. Well-known exceptions, however, are the bunch berry, a perennial herb; and the pagoda dogwood, which has alternate leaves. Dogwood flowers are small and are produced in branched terminal clusters that are sometimes surrounded by showy white bracts. Thus, the so-called petals of the familiar flowering dogwood are actually bracts."
http://www.bright.net/~dogwood/article.html

Once it has lost its leaves, it comes into its own, as its branches, all growing straight upwards and now becoming visible, are either red or brilliant yellow, and thus lend real beauty to the roadsides or hedgerows in winter.

Small, creamy-white flowers in May and June and oval, dark green leaves, which redden in autumn and fall to reveal bright, coral-red stems. This red-barked dogwood is perfect for a waterside planting. To achieve the best stem colour chose a sunny site and hard prune the stems to within 5-7cm (2-3in) from the ground each March.
http://www.crocus.co.uk/search/pl/?ContentType=Plant_Card&ClassID=963

Cornus sanguinea
Sanguinea means "blood-red" referring to the coloured stems of this species which is a native of England, Ireland and east to Russia and western Asia. It is found in scrubs and hedges, often on chalk.
The winter shoots of this upright, deciduous shrub are reddish-green, sometimes completely green and different cultivars are valued for the varied colours of the winter shoots.
The leaves are mid-green, ovate and up to 10cm (4in) long, turning red in autumn. White flowers are borne in May or June in dense, flat cymes, up to 5cm (2in) across.
The fruit are spherical, matt blue-black, bitter and inedible. Once used as a source of lamp oil, their oily nature led to the dogwood being called the “wax tree”.
It was also called the “dog-tree” and “dogberry” because its fruit was considered unfit even for dogs.
Shakespeare gave the name Dogberry to a character in Much Ado About Nothing, indicating the prominence of the dogwood in British life at the time
http://www.rhs.org.uk/gardens/rosemoor/archive/rosemoorpom03dec.asp

Dogwood Plants all over the World
http://tinyurl.com/4w2uq


A dance of the Mountain Priests, Yamabooshi Odori

under the
flowering dogwood-
a chance meeting


***** doogwood winter, blackberry winter
kigo for spring
a term used by Southerners to describe a period of cold chilly weather that coincides with the blooming of the local dogwoods.
Typically the treess bloom sometime between mid-April and mid-May (depending on the weather variations of the season) and such a cold spell is often the last winter-like weather of the season.
http://davesgarden.com/terms/go/1845/


About Japanese kigo for periods of cold weather in late spring
A cold spell and chil on flowers, especially the Cherry blossoms, is called " . hanabie ." flowers getting cold (花冷え).
Tsuyubie (梅雨冷え) means a cold spell during the . rainy season . , which is a kigo for Summer.

Another way to express the late cold is the use of various forms of . frost . , like parting frost, late frost and so on, as described as the kigo for late spring.

dogwoods disappear
trapped in a forest
without spring

quote
It’s spring again and the flowers are blooming. But one important harbinger of spring is increasingly absent from our Virginia woodlands — the flowering dogwood (Cornus florida). These beautiful native trees are succumbing to the dogwood anthracnose fungus (Discula destructiva), a non-native fungus that has killed over 95 percent of the dogwoods in some areas.

While the loss of the dogwood’s delicate spring blooms and deep purple fall foliage is upsetting, the loss of ecological function is cause for serious concern. Dogwoods are an important food source for wildlife and a significant component of the calcium cycle in eastern forests.
Virginia Department of Forestry
source : www.fairfaxcounty.go 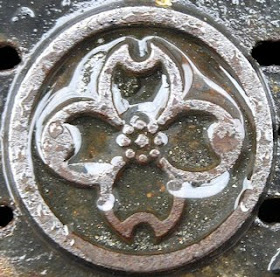 early May
a dogwood blossom
on a manhole cover